We can no longer accept advance payment, but tickets can still be bought on arrival, so fear not! 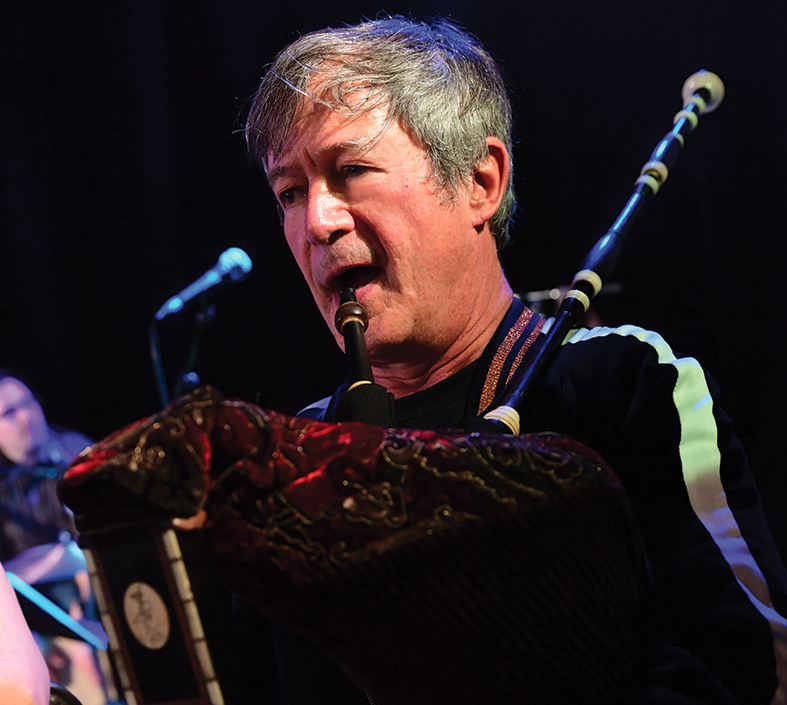 As a musician, collector, ethnomusicologist, teacher, composer, publisher and co-founder of Modal Magazine, the influence of Eric Montbel on the revival of the French bagpipes and their repertoire cannot be overstated and it is a great honour to welcome him back to the Blowout, after far too long an absence.

It was in the 1980s that Eric became a leading bagpipe specialist in France, after many field trips to collect and record the music and song of the last players of the Centre: Limousin and Auvergne. In 1984, he reissued some recordings by the master of the Auvergne, Antoine Bouscatel and revived the playing style and repertoire of the then forgotten chabrette limousine and the musette of Central France. He has many recordings to his credit including the hugely influential l’Art de la Cornemuse, Cornemuses, then Bagpipes of France for UNESCO, with Jean Blanchard. He has performed widely throughout Europe and the Americas, both solo and as a member of groups such as Le Grand Rouge, Lo Jai, Ulysse and more recently Vertigo with Bruno Le Tron

In 1996, his solo bagpipe CD Les cornemuses à miroirs du Limousin was a great critical success, receiving a number of awards including Grand Prix of the Académie Charles-Cros.

Eric is regularly involved in international projects, having worked in São Paulo (Brazil) in “Orquesta Mediterráneo”. He also directs the ensemble Le Grand Balèti of Marseille’s Cité de la Musique, a group of amateurs devoted to the traditional bal and folk dance.

Along with his solo work, we will have the rare opportunity to enjoy the results of his collaboration with ZampogneriA and experience a unique combination of musical textures from two separate but connected traditions. 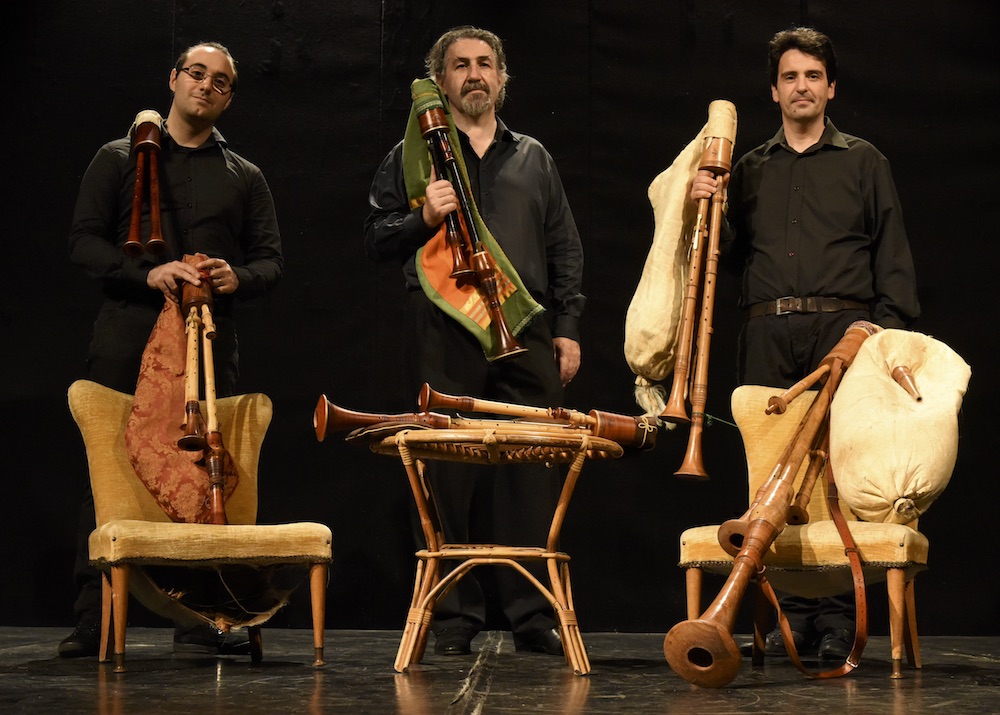 ZampogneriA are Marco Tomassi, Marco Iamele and Giorgio Pinai. They are dedicated to the enhancement of that most iconic Italian bagpipe, the Zampogna. Since forming in 2015, the trio has gained international recognition, performing widely, both in their own right and in collaboration with artists such as Susana Seivane and Eric Montbel, with whom they are working on a French-Italian repertoire of Christmas and dance music, played on Grande Cornemuse à Miroirs and Zampogne. Their first CD Fiumerapido attracted attention all over the world reaching seventh place in the world ranking of listeners to world music radio.

At their core is the fundamental experience acquired through the research and reconstruction work done with Liuteria Montecassino, sharing studies, prototypes, and technical solutions to finally develop versions of ancient and new models of Zampogne and Pifferi that are versatile and capable of facing new challenges. Most of the instruments Marco Tomassi makes and plays are inspired by the Sordellina, an ancient court Zampogna, bellows-blown, with 3 chanters and numerous keys, and by the Zampogne of the XVII, XVIII, XIX century “musici dell’arte”. Another relevant inspiration are the giant Zampogne widely used in the past, especially among migrant itinerant “zampognari”. 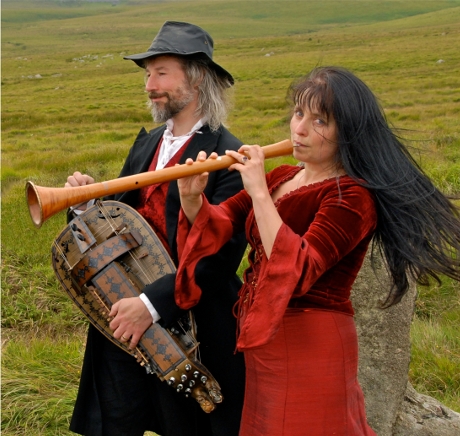 Steve is well known as a hurdy-gurdy player, renowned for his rhythmic and inventive playing, and is equally at home with early music, traditional melodies or modern compositions. He has performed with such diverse artists as English folk singer Jackie Oates, German industrial/electronic musician F M Einheit and South African puppeteer John Roberts, and has played for theatrical productions (most recently at The Globe’s Sam Wanamaker Playhouse), historical and traditional dances, and mixed media performances. He is currently playing with bagpiper Katy Marchant and working on dark multitrack music mixing hurdy-gurdies with dulcimer, reed organ and diverse instruments, inspired by patterns in nature, mathematics and the imagination.

Paul Roberts was an early pioneer of the Border pipes revival, winning the first three LBPS competitions in 1984-86. He specializes in the music of Northern England and Lowland Scotland, and has also written extensively on the subject of British bellows bagpipes, their music and history.

Both Eric and Jane are well known to both the Bagpipe Society and the early music world. Eric is one of the world’s leading makers of Renaissance double reed woodwind instruments and Jane is known to all as the editor of Chanter. They have been running Piva since 2002 and it is now established as one of the country’s leading Renaissance music ensembles. Known for their interesting arrangements and multi-part harmonies, bagpipes feature prominently amongst the many instruments they play in the group.

The Zampogna, Past, Present and Future. There is a lot of interest in double chanter pipes but most of us know only a little about the Zampogna, beyond it being a popular instrument for travelling Italian musicians in the 18th and 19th centuries. ZampogneriA will be presenting an illustrated talk with music examples about its history, revival and how it is evolving in design and repertoire.

Please note: All resource/preparatory material will be available on this page and will be updated when necessary

Eric will be leading two workshops for players of G pipes. He writes: “We shall work on 3-time “bourrée” style, ornamentations and rhythm, from repertory of pipers and fiddlers from Corrèze and Auvergne generally. We shall have the project of a dance set for the evening, as it was played in the bals from Auvergne and also from the Parisian “bal-musette”. We shall explore the drone music of French bagpipes, which means modal music, rather than tonal harmonic music and the bagpiper as a soloist, making his own body a whole instrument”.

Eric and Jane Moulder, from the Renaissance music group Piva, will be leading two workshop sessions exploring music for bagpipes from the late 16th century. During this period, whether at court or in the country, the bagpipe was the instrument of choice for accompanying dancing and there is consequently a rich repertoire of music which can be easily adapted to suit the instrument. These sessions will work on 2-part harmony settings for bagpipes in G with the first session concentrating on music from England and the second featuring music from continental Europe. Low C and high C bagpipes are encouraged for those who have them, as this opens the possibility of some 3-part harmony arrangements.

Workshop material is available as a zip file on request to: info@bagpipesociety.org.uk

Steve will be leading an extended workshop on the hurdy-gurdy, spread over the entire day and is open to purchasers of both Weekend and Saturday Day tickets. This workshop is aimed at intermediate to advanced players who are aiming to further develop their technique. The workshop will be suitable for D or G tunings but a D trompette is most useful. The focus will be on rhythmic and melodic patterns used to enhance and interpret a simple tune using medieval and newly composed source material, including a fragment of the polyphonic Exercise Two –

Updated (8th May): “Playing the Triple-Time Hornpipes of Northern England and the Borders. This workshop will look briefly at the origin and distribution of this music, at how the melodies and their variations are constructed and elaborated, and consider how to approach the archaic rhythms of 3/2, 6/4 and 9/4. Several examples will be looked at and (hopefully) the group will learn the 3/2 hornpipe “Lads of Alnwick”. Mainly for D smallpipes (any type) but all compatible instruments welcome.” 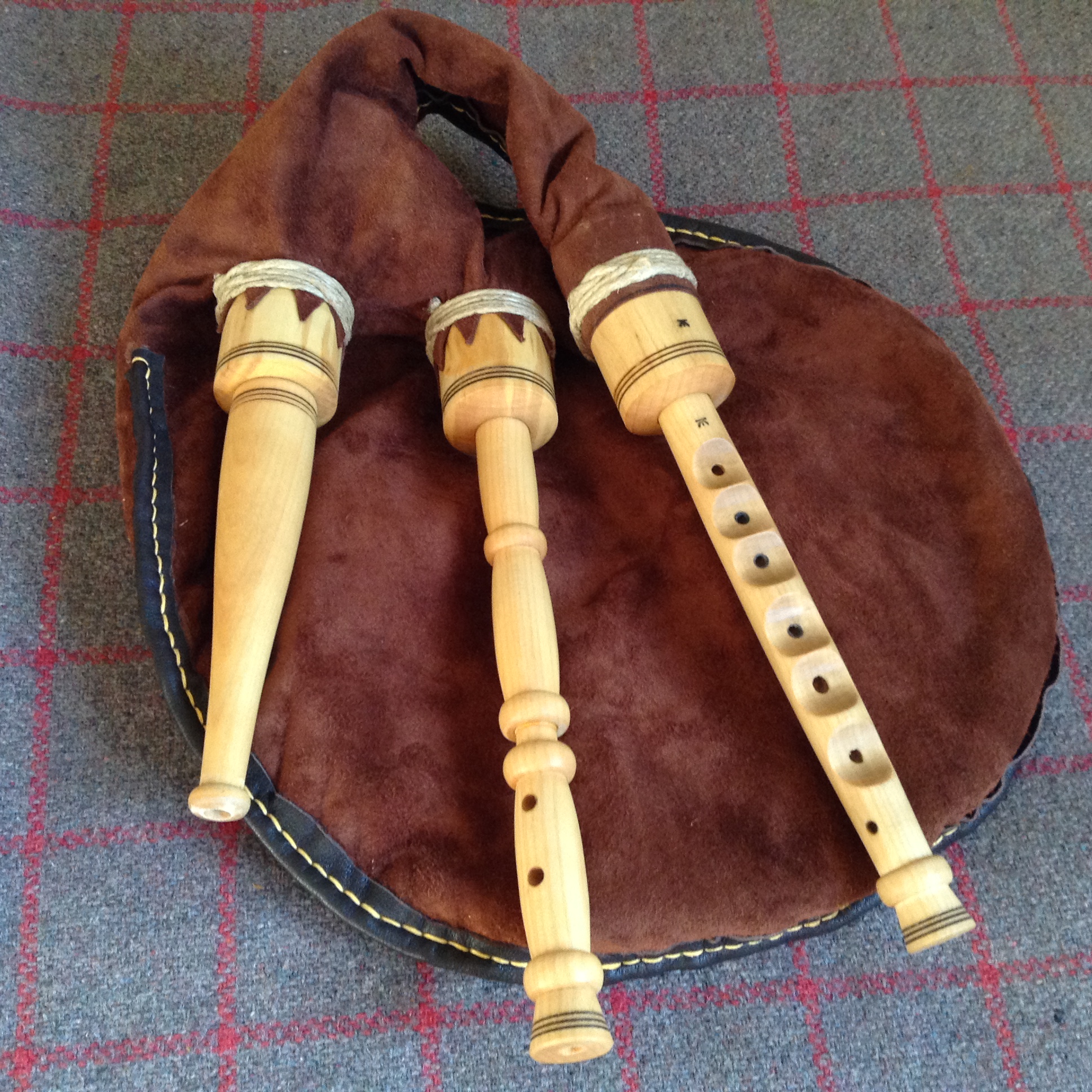 Terry has been making Säckpipa for several years. They are based on the revival set made by Leif Eriksson in the 1980s, but with his own adaptations. In the workshop we will be playing the traditional E/A(min) tuning and looking at ornamentation through specific Säckpipa tunes.

By popular demand, Pat will once more be leading us through some of the dances likely to feature in the Bal, plus something new, no doubt! 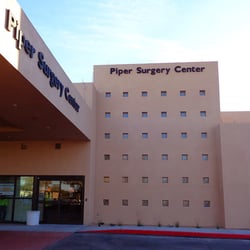 Now a regular feature of the festival, the ‘pipers’ surgery’, is principally for players of Southern English Border Pipes, but open to all, especially beginners and those at an intermediate level. Come with questions about technique, posture, repertoire, or practice and he will do his best to help!

This workshop is for anyone who has just started out and would like a bit of help in establishing good practice from the outset. The Bagpipe Society’s own student borderpipes and smallpipes will be available for use if anyone wishes to try them out.

Julian has taken full control of this. The title of this year’s competition is “I’m sorry I haven’t got a Bagpipe”. Rubric available here. No questions permitted!

The following pipe makers will be exhibiting their wares and will be glad to help you draw up your wish list: Jon Swayne, Julian Goodacre, Sean Jones, Jim Parr, Terry Mann

Whistle maker Phil Bleazy will also be in attendance.

Buy, sell, swap, donate - it’s up to you! There will also be a final opportunity to acquire some of the last remaining paper copies of Chanter from the days of yore.

Vanessa (The Blowout’s official caterer) will again be providing all the meals for the weekend – quality, quantity and value for money. Most of the food will be bought in the village to support the local economy and reduce food miles. Read the menu here.

IMPORTANT: We can now no longer accept further meal bookings. If you have not already booked and paid for your meals, you will now need to make alternative catering plans. 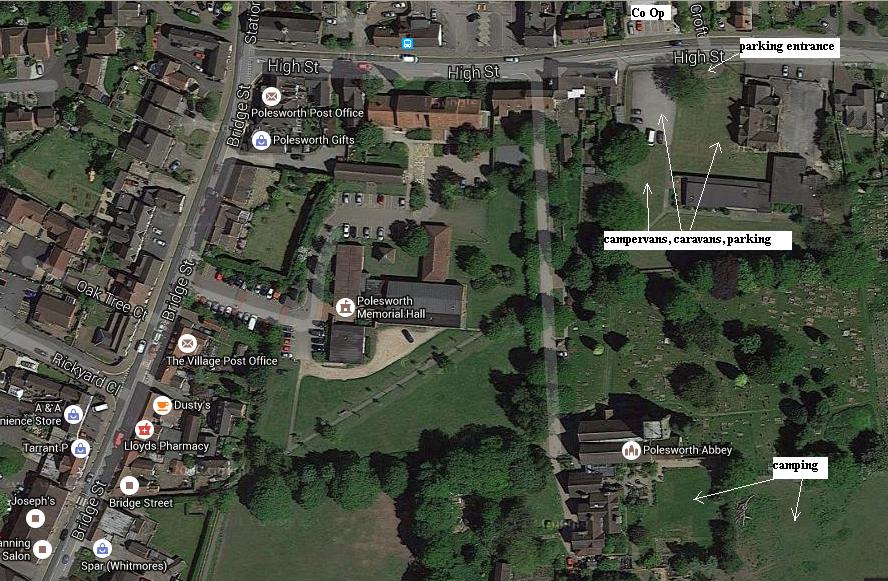 Unless there has been heavy rain beforehand, all camper vans and caravans must park in the grounds of Polesworth Learning Centre, which is accessed through the gate on the right just after passing the gatehouse and the Co Op on High Street. Please note: some of the ground is very soft, due to archaelogical excavations. Check carefully before you park up. Also, the entrance is very tight and unsuitable for very long wheelbase motorhomes, for which we have made separate arrangements - contact info@bagpipesociety.org.uk for details.

The Church driveway is strictly no parking. There are only a few spaces available for cars, next to the Church, but they are solely for disabled visitors to the site. There is no problem with the usual drop off and unload, either by the Refectory door or by the garage, which is probably an easier way into the garden. After drop off, re-park, either by the Memorial Hall or preferably on the Learning Centre Car Park, space permitting.

Postal address: Polesworth Priory, High Street, Polesworth B78 1DU. On arrival, please make yourself known at the reception area in the Memorial Hall.

Any updates or changes will be announced on our Facebook page.